After the shooting of ‘Sam Bahadur’ started, Vicky Koshal said that he considers himself very lucky to play this character. The film is directed by Meghna Gulzar and the film will be released in 2023. 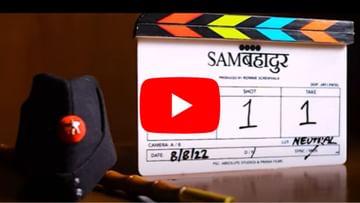 Vicky Kaushal is making headlines these days for his upcoming film. The shooting of his upcoming film Sam Bahadur with Sanya Malhotra has started. Vicky and Sanya will be seen sharing the screen for the first time with this film. Let us tell you that the story of this film is based on the real life of India’s most brave war hero and the first Field Marshal Sam Manekshaw. In which Bollywood actor Vicky Kaushal will be seen in the lead role.

Vicky Kaushal and Sanya Malhotra starrer Sam Bahadur is now on the floor. Both the actors are busy shooting for the film these days. Ronnie Screwvala is producing this film which is being directed by Meghna Gulzar. Apart from Sanya, Fatima Sana Shaikh is also in an important role in the film.

Talking about Sam Manekshaw, whose life is the story of this film, his army career was tremendous. His life of almost four decades and five wars was very exciting and interesting. Perhaps this is the reason why Vicky Kaushal decided to work on his biopic. Sam was the first officer to be posted as Field Master. Bangladesh was created due to his military victory in the 1971 war between India and Pakistan.

Watch the making video of the film here

Meghna Gulzar was seen in the making scenes

Let us tell you that during the shooting recently, a video by the makers from the set has gone viral. In this video all the actors are seen working on the film. This video is of the making scenes of the film in which Gulzar, his daughter Meghna Gulzar’s entire team are also present. According to reports, Meghna Gulzar, who is excited to shoot the film, says that finally, after years of extensive research, writing and hard work, the shooting of ‘Sam Bahadur’ has started.

What did Vicky Kaushal say about his character?

At the same time, when Vicky Kaushal was talked about on this, the actor says that I consider myself lucky to play a character on the life story of a hero and a patriot in real life. He further said that I am sure that the audience will be very thrilled to see Sam’s mesmerizing journey of making India today.

When will the film release?

After the news of the shooting of this film of Vicky Kaushal, Sanya Malhotra and Fatima Sana Shaikh directed by Meghna Gulzar, now the audience is eagerly waiting for the release date of the film. Let us tell you that this film is ready to knock in theaters next year in 2023.