Talking about the efforts of UNICEF volunteers, Priyanka said, ‘I have met many heroes in the last few days…they are UNICEF men and women, volunteers, partners and everyone who is there in this time of need. have come together. 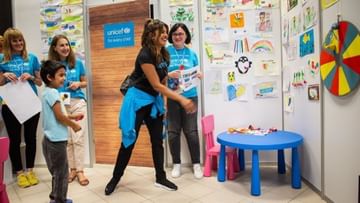 These days Priyanka Chopra is on a trip to Poland to meet the refugees from Ukraine. Priyanka wrote a post in praise for UNICEF’s commitment, perseverance, dedication and compassion. Priyanka has been associated with UNICEF for some time now. In a recent post, Priyanka said, ‘Every journey I have with UNICEF reinforces my belief in the goodness of humanity even more. I think a hero can be anyone who really intends to make it a better place for all people.’

At the same time, while talking about the efforts of UNICEF volunteers, Priyanka said, ‘I have met many heroes in the last few days … they are UNICEF men and women, volunteers, partners and everyone who is there in this time of need. have come together. I am shocked by their perseverance, commitment, dedication, compassion and simplicity, even in helping those who need it the most.’

Told about the crisis in Ukraine

Highlighting UNICEF’s quick action during Ukraine crisis, Priyanka Chopra said, ‘The Ukraine crisis started in February and the UNICEF team responded immediately. Raised a lot of resources to help the refugees coming to Poland, Romania, Moldova and many more countries.

UNICEF built office in Poland in a short time

UNICEF also built an office in Poland within a very short time. On this Priyanka Chopra said that, ‘At the beginning of the conflict, there was no UNICEF office in Poland, but within a very short time UNICEP employees came from all over the world. Everyone helped to speed up the wheels of Poland. Priyanka Chopra ended her talk by saying, ‘Thank you for everything you do… you are my hero.’

Priyanka had met the children of Ukraine-

Even before this, Priyanka Chopra shared a post in which she can be seen spending time with Ukrainian children. During that time Priyanka had said that, ‘The children I met on this mission love working with art.’ He said during his journey that, ‘There are many wounds of war, which are not visible and usually you do not even see them in the news.’

Bollywood celebrity Priyanka Chopra recently celebrated her birthday. During this, his cousin sister and Bollywood actress Parineeti Chopra was also seen with him. Both had a lot of fun on the birthday celebration. Talking about Priyanka’s work front, she will soon be seen in Hollywood series ‘Citadel’ and Bollywood film ‘Jee Le Zara’.