The trailer of the film has got a tremendous response from the audience but now the real test will be in theatres. Know how Ek Villain Returns full of suspense. 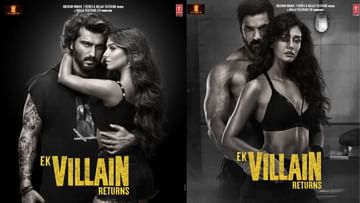 Bollywood director Mohit Suri’s film ‘Ek Villain Returns’ Released in cinemas. This film is a sequel to Ek Villain which came in the year 2014. In the first part of the film where Riteish Deshmukh, Siddharth Malhotra and Shraddha Kapoor were there. So right there, John Abraham, Arjun Kapoor, Tara Sutaria and Disha Patani are in lead roles in Ek Villain Returns. Along with action, thriller will also be seen in the film. But after 8 years, how much will the sequel of Ek Villain entice the audience, let’s know the review of Ek Villain Returns.

What is the story of Ek Villain Returns?

It is very difficult to guess the story of Ek Villain Returns from the way the trailer of the film was shown. Romance is filled with action in the film. The film begins with the scene of the party going on in the house, where suddenly a person comes and starts killing everyone. That is, you will get to see action from the beginning of the film. After this Arjun Kapoor’s entry in the film. Who belongs to a rich family but is spoiled. His only principle is that he knows to die but not to lose. Next in the film comes Arvi Khanna i.e. Tara Sutaria, who can do anything to become famous. During this, the romance between Arjun and Tara is shown in the film.

The twist in the story of the film comes when John Abraham meets Disha Patani. After this the series of murders starts in the film. The main character of the story, who is also a villain. He becomes the messiah of people who are deceived in unrequited love. However, this villain hides behind the mask. Mohit Suri has tried to show the power of stubbornness in this film, which has also been successful to a great extent. The suspense remains intact in the film even when Arjun Kapoor and John Abraham face off. Meanwhile, the police are looking for a villain. But I am neither Disha Patani Villain nor Tara Sutaria. So it is obvious that this villain is one of John Abraham and Arjun Kapoor. Just in the film, suspense has been created about this thing. Who is this villain and why commits murders, you will have to watch the film. The interesting thing is that the first villain i.e. Riteish Deshmukh has also returned in a part of the film.

Viewers will be happy with the action and suspense

Strong action is shown in the film. John Abraham is known only because of his action. At the same time, Arjun Kapoor also left no stone unturned to film this sequence. Mohit Suri has managed to maintain the suspense.

John Abraham has given his life to make his character look real. Disha Patani has acted better than average in the role of Rasika. However, Tara Sutaria’s dialogue delivery is not very impressive. Talk about the music of the film, the audience can hardly be happy with it. But it will be interesting to see how long the next part of the film will come, according to the way the first serial killer of the film has been shown.